Having an excessive amount of free time, but being limited to a computer does have its perks – it gives me a chance to catch up on months of blogging and forum posts that I would not normally read as there is always something non-computer-based to do.

Going through the links on my blog I “stumbled” across From the Left Wing again, and found a post that captured a few of my thoughts about football and the role of cheating in the sport. Titled Henry’s Handball & the Moral Ambiguity of Football, it’s fairly obvious what the post covers.

Football is a game that stirs emotions. Managed by humans, mistakes are bound to happen - fouls that are missed, clean tackles that become punishable offences, diving, calling a ball out when it remained within the field of play, giving a goal kick when it was clearly a corner, etc. Oh, and handballs.

Any of these offences can have drastic consequences - but I think handballs are rarely used to the same effect as Maradona and, recently, Henry have done. Perhaps that’s why Henry copped so much flak but FIFA did nothing. I would say it’s almost become accepted that players dive and are (mistakenly) awarded penalties. I could imagine that if FIFA made a decision on Henry, they would set a precedent for all kinds protests against rule-breaking actions that result in a goal/could have resulted in a goal.

And wouldn’t they be busy bees if they had done anything with Henry. As Jennifer Doyle writes:

Handballs, offside calls, the identification of goals and the discounting of goals, calls for aggressive tackles and diving - all are made by referees without the help of video replay, and are vulnerable to human error and players know it - and the most competitive exploit this. It becomes part of your game.

I think Australians are too naïve when it comes too this. We generally play by the rules, but someone else will spoil the party. And when the game is over – we’re left with nothing.

Even if you refuse to include it in your game you must accept that it occurs. You must make sure that you do not give the opposition the opportunity to cheat in a way that is catastrophic to your team. I won’t name or describe the best example for us, as I think that it is obvious.

“Cheating" is an art in this sport.

Personally, I’ve never handballed in an un-obvious way (I have had brain snaps in the middle of the park where I’ve obviously stuck my hand out, made contact and sworn at myself/burst into a giggle fit at my idiocy) and diving isn’t in my repertoire.

But I recognise that football can be subjective. I won’t pretend otherwise.

I exploit this. I won’t pretend otherwise.

I abuse opposition officials if I notice them unjustly interfering with the game (as a coach, I don’t taint my players – I will simply give my team instructions or cheer them on but especially loudly when the linesperson happens to be in front of me. Or specifically, their ear is in front of me. Their faces are gold when you see their paranoia develop - Surely it’s just in my head that she gives louder instructions while I am there.)

I waste time. I like to think time wasting is a special talent of mine, particularly as a goalkeeper.

I claim the opposition’s ball.

Lots of white lies. You probably think that they’re not as bad as handballs and diving in the box…

Let’s return to I play until the referee stops me. I have gotten away with football murder. I was so good, I convinced all but one team-mate (who was on the goal line with me), our coach (at the time, my eagle-eyed dad) and the opposition attackers. What if I got caught? Well, I would have played dumb and accepted the referee’s decision.

For the record, I have only ever had one yellow card. For indoor. Apparently slide tackles are illegal.
Posted by Cecilia at 11:46 am No comments:

Taking a bite from my hat

But I did quite like Archie's outside of the foot touch to Tommy P (he's the only Tommy, but I like calling him Tommy P - perhaps inherited from Wayne?) who then crossed it for Kruse.

So while Archie did annoy me somewhat, I'll ease up on him. For now.

It would be very unlike me if I didn't complain about the match - I wouldn't say that Melbourne played well but that Perth assisted with it's lack of display. In the first half, Hernandez managed to get a break on the Perth defense. Hernandez. How?!??!??! It also happened in the second half when he (finally) scored, though I do think he was offside at the time, so that wasn't as much as a miraculous feat.

The other thing that irritated me was the number of opportunities that Carlos wasted. However, he scores once and the crowd appears to forgive him. #@$%@*!!!!!!!

To further add to my woes, I think I am really losing whatever interest I had in the A-League. Seriously, I'm struggling.

*No swear word in particular, just feeling frustrated by a crowd that likes goals rather than football.
Posted by Cecilia at 8:47 am No comments:

Out with the old, in with the new

Further to my Charlie Miller musings last week, we now have Moore to add (hee hee, although the pun was not intentional). Perhaps even Reddy had to go for the same reason!
Posted by Cecilia at 6:49 pm 1 comment: 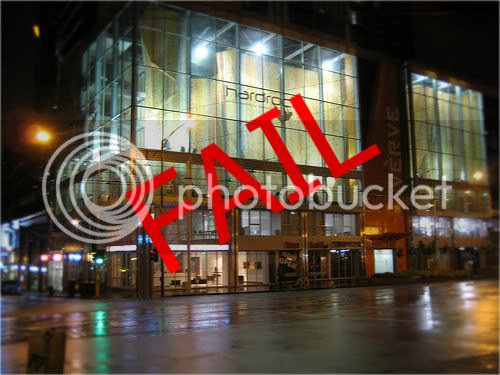 a.k.a. Cecilia rockclimbing FAIL.
In the meantime, you can read Faux Fuchsia's blog post on decluttering. Nothing at all to do with football, but she keeps The Decluttering Thread going on the Vogue forums, so she's a saint of sorts.

Especially since I'm trying to cut down so that I don't take excess stuff to Sydney and that I don't leave too much behind in Melbourne.
Posted by Cecilia at 10:32 am No comments:

It's been a while since I've posted some fan letters - I checked my older ones, I did have to laugh at myself when re-reading the one to Newcastle about how to waste time. But today, something a little more serious. Not that time wasting isn't serious, but...

Dear Mr Pasfield
Your yelling is quite annoying - it's high-pitched, panicky and there's an awful lot of it.

No wonder your defenders don't listen to you! Their eardrums must've burst by now.

If not, perhaps they've taken a preventative measure. So the lesson here is too much yelling and they don't want to listen to you. A bit like Ben Kennedy has experienced. Have a chat to him about it - but please don't yell during this conversation.

Although your yell does provide an endless source of amusement when one tries to mimic it.

- Cecilia
Your biggest yell mimic (and yes, I'm annoying too).

Dear Mr Langerak
If you were a little older I would have undoubtedly already written to you by now - you're such a cheeky little cutie. :) Add your baby face and you really seem illegal.

However, cheekiness and cuteness aside, please learn how to use your body properly. I'm not convinced that that ball you were "shielding" from Brockie was actually out. I suspect that you were in punching distance of the assistant referee and we all know that you really are all limbs. You're kinda like a daddy long legs, but with only four legs. Although two are arms.

So, at training this week, try and have a chat to Carlos. I say try, because I have no idea if he actually speaks English yet. Try playing Charades if the talking thing fails. Though with your long limbs, he may mistake you for a John Cleese/Frank Woodly type and laugh himself silly.

Why Carlos? He is very good at using his (ample) body for shielding and protecting the ball. Get him to show you how he uses his body to shield the ball. It mainly involves sticking your arse out and creating space.

If Carlos offers to take the training further, please be careful. He does have an ample body, and we know he loves chicken, La Ionica chicken. So if you end up at his place for dinner, stick to the breast.

You don't need a big arse to stick it out and create space. I wouldn't want that cute little face of yours ruined by excess fats.

Dear Mr Vargas
I hate deflections. Please stop trying to do too much so that you don't make proper conduct and the ball follows some random trajectory that even Charlie Eppes couldn't figure out - and he's good at making sense of nothing. I've seen him on TV, so it must be true.

You're also quite slow and a poor marker. No wonder Daal got the better of you. Not to mention previous North Queensland attacks seem to have gotten through due to your inability to mark and/or read the game. Sure sure, the goal happened because of a wayward Leijer pass (intentional, so Charlie might have been able to calculate it), but Daal needed to be better marked.

Also, please don't collect silly yellow cards. The only reason one should collect one is when you've made a serious tackle. Not because you feel like arguing. He's the ref. He has cards. He'll always win. Unless it's Delovski - he seems a bit soft on the cards.

- Cecilia
A paid-up Melbourne Victory member for quite a few years now.
Posted by Cecilia at 9:56 pm 2 comments:

My work office has been closed from December 24 and will reopen on January 11. That's a lot of free time - and while I have much to work on (planning the move) it's too early to start working on it, as nothing really happens until February. It's not even the New Year yet!

The A-League hasn't been all that enticing this season, I'm still wondering how Brisbane was so successful in leaving the league's highest scorer unmarked! It's not as if they can blame Farina now!

Though I did love how Charlie's team won. Hee hee - take that Postekos! :) I wonder if Charlie's comradeship with the younger players was why Postekos needed him gone - after all, Postekos has been a youth coach lately and perhaps he wasn't keen on someone older undermining his authority...

Hmm... Victory are playing tonight - I suppose that's a good way of ensuring that my second layer of nail polish. Perhaps I'll add a photo of it later this evening as Google Image is of no assistance!
Posted by Cecilia at 6:58 pm No comments: