Dear Melbourne Hearts, or whatever you're going to be called

Try and ensure that you have an iridescent playing strip. One colour needs to be whatever fits with your logo (i.e. what the FFA assigns to you) and other needs to be sky blue.

When one of your players swears at the ref, make sure your player has positioned his shirt so that it looks sky-blue to the referee and television crew. While your player will still be sent off, he will only cop a one-week ban (as per Sydney's McFlynn who was wearing white and sky-blue) as opposed to a two-week ban (as per Melbourne's Archie Thompson who did not have any sky-blue on him at the time of the incident).

Cecilia
Posted by Cecilia at 9:23 am No comments: Links to this post

I meant to go shopping today, but after problems at the bank and having to return home early because of paperwork I decided to go on a cycle instead. The weather was pleasant so I decided to go into the city... and ended up taking a few pics of the upcoming stadium.

Last night was a show of how far the A-League needs to come. It was also a show of how our Fox Sports commentators need to be more critical. With two commentators calling every game on Fox Sports, there is obviously the capacity for one person to be the play-by-play announcer and the other to offer some critical analysis of the came in progress.

Last night Andy Harper and Mike Cockerill did their usual jobs of describing the play - well, kinda. There were times last night that they would describe some of the play - or make general comments on how much better Gamba Osaka were than Adelaide. But they offer nothing to those who watch the game and want to really learn something. The sad part was that everything was easily blamed on Adelaide's smaller budget and how young the A-League is compared to the J-League. It was almost as if it wasn't Adelaide or its players' faults that they were being played off the park last week and last night.

Finally, a shining beacon of truth came along at half time. Ross Aloisi typically has me rolling my eyes - how can I take such a thug seriously in a suit and with a microphone in his hand? Well, it turns out that the thug in a suit was the only one who could either see the lack of spirit in the Adelaide boys or had the balls to actually voice his opinion. Craig Foster is another face of TV who is known for his criticism - but he tends to criticise everything possible. A lack of proper acknowledgment has worked against him and I know that many fans of football tend to switch off once he opens his mouth.

Last week Robbie Cornthwaite was a disappointment, whenever he was beaten or needed to back-track, he'd just jog along behind the play. No desperation. No hunger. Did he really want to be there? Last night, the same thing happened. But it took the half-time break for someone to point it out. Aloisi also criticised the rest of the defence. Unfortunately being an ex-player does not mean that you are able to be a good critic or offer that extra piece of information to fans about the tactics that are working, or conversely not working. Andy Harper anyone?

If a team was "built from the back," as Harper would say of Adelaide (or something like that), you would expect a team that had a rock-solid defence that would play the ball out. Instead Adelaide have a brainless defence - any time there was trouble, they would play hoof-ball forward. That was how the poor Birighitti ended up being put under pressure due to Valkanis, and how Gamba scored their first goal due to Ognenovski.

Unfortunately, it's a style of play that is deeply embedded in our football psyche - perhaps an artefact of so many youngsters being saturated with AFL. So until our youngsters stop playing Route 1, perhaps more hoof-ball is what we should not be suprised at seeing. We need to ensure our coaches at all levels readily criticise the style - after all making contact, whacking the ball with some strength, getting it in the right direction AND getting it to a team-mate is a lot to muster in one move. It is a risky move. That is not to say that players should not play that way if they can - but in all seriousness, first touch is something that is lacking in many of our A-League players. If such a basic skill is missing, how could we possibly expect success in more difficult skills?

In other news, best wishes to Craig Moore and may he have a speedy recovery.
Posted by Cecilia at 1:38 pm 2 comments: Links to this post

I think not. We just get thrown into some deep shit at times.


You've been watching your team play Mickey Mouse passes for the past 90 minutes. You've only seen fleeting moments of hunger, but there's no denying that of the two teams - the other has been more desperate.

You're already three goals down, and you've lost the one player with the best ability to read the game. But he too, has only been a shadow of his former self. He's been getting you out of trouble sometimes, but he's just as casual as the rest of the team.

Then it happens. A break. From about half-way. Keeper's instinct is to go up and close the player down. Reduce the amount of goal available for the shot. But the run for the player with the ball is too far.


And you run out of box.


Shit.
Posted by Cecilia at 10:51 pm No comments: Links to this post

Where's the hunger Adelaide? "Loved" that sight of Robbie Cornthwaite jogging down the right flank in such dire desperation to stop Recoba/Endo. 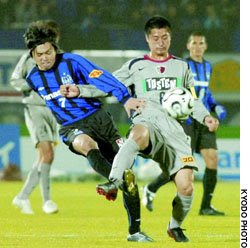 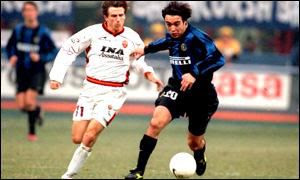 Handy that they're more or less wearing the same shirt.
In other devastating news - Leeds are finally on the telly... but of course I have to be in Brisbane at the time. As a Melbourne Victory forumite put Brisbane as being five years behind Melbourne, I think I'm more or less screwed in watching the boys. I think we're going to try the casino, but if anyone has any bright ideas on how to get my eyes on a TV screen showing a football match that kicks off at 5.45am I'm all ears. Or eyes if you choose to comment.
Posted by Cecilia at 9:47 pm No comments: Links to this post

Oh there's nothing quite like being back on top of the league after Sydney had a 3-0 lead.

Unfortunately I'll be missing the Central Coast boys when they're down in Melbourne next as I'll be at my final year dinner. Shame as I do like watching them play - I suppose I'll have to make sure we end up somewhere with Fox Sport... oh hold on... I am helping organise the night...

On a more serious note, McKinna, please sort out the defence. The first two Sydney goals came from mirrored mistakes. Yes, the marking was goal-side, but the defender in both instances was not inside the attacker, so it wasn't that heard to go around. Doesn't help that Vuko was off his line... and could some team PLEASE realise that the lay-the-ball-off-for-someone-to-run-on-and-slam-it-in is becoming a Sydney trademark? Sure, it wasn't Santalab this week, but that McFlynn did it means... CLOSE THE BALL DOWN!